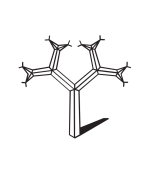 Building Data, Inspired by Nature A Difference In Making

The design of this table aims at blurring the line between the natural and the artificial: it is designed by growing a “digital seed” that contains all furniture parameters, later “grown” or evolved following “organic” logics through computer software.

Mathias Bengtsson has always described himself as a designer, but his works are closer to fine art than to traditional industrial design. Working with diverse industrial materials and processes, Bengtsson pushes forward the sculptural, technical, and philosophical possibilities of three-dimensional design. Accordingly, the majority of his works are unique or created as editions, requiring both high-tech production facilities and labour-intensive processes. Museums on both sides of the Atlantic have been quick to acquire Bengtsson’s works, and his pieces have entered the permanent collections of institutions including the Museum of Modern Art, New York, the Contemporary Art Museum Houston, the Montreal Museum of Fine Arts, and Manchester Art Gallery. Almost uniquely for a designer around 40, his work has been shown extensively both in fine art and design contexts, at venues such as the Design Museum, London and the Rohsska Museum, Gotheberg, and in public galleries such as The Lowry and Northern Gallery for Contemporary Art.