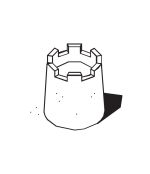 This piece was 3D printed by binding micro-layers of a mixture of sugar and plaster with sake (Japanese rice wine), a sustainable alternative to 3D printing in plastic.

Daniel Widrig founded his studio in London in 2009. After graduating from the Architectural Association, Daniel worked for several years with Zaha Hadid where he was significantly involved in designing some of Hadid’s most iconic buildings and products. Daniel’s studio now works in a broad range of fields, including sculpture, fashion, furniture design, and architecture. Embracing digital systems since its early days, the studio holds a unique position in the field and is widely recognized for the tectonic and material complexity generated by his process of form research.

Daniel has received international critical acclaim and has been published and exhibited at, among others, the Victoria and Albert Museum and, on the occasion of the 9th ArchiLab edition, the Frac Centre.
Alongside his practice, Daniel is currently directing a research cluster at the UCL / The Bartlett’s Graduate Architectural Design Program.