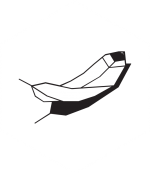 Patrick Hoet was born into a family of opticians with a business dating back to 1884. Thus, it was quite logical for him to also become an optician. After some years of practice, he followed courses at the art academy in Bruges before turning to other goals. Together with Wim Somers, an optician from Antwerp, he founded Theo, a company where he could be creative as an eyewear designer. After five years, he sold his part of the company to Mr. Somers and founded the independent design office Hoet, still designing for Theo, but expanding the creative activities to other fields such as furniture and lighting.

Today, the Hoet office is concentrating again on eyewear, offering its services to third parties as well as developing and marketing its own eyewear brands. In 2013, Patrick launched the Hoet Couture collection. It was the first 3D-printed titanium eyewear collection and it is, up to now, still the only company offering these kind of frames. Co-managed by his daughter Bieke Hoet, the design office continues to bring 3D-printed frames in polyamide, made by Materialise, to the market. The Hoet office is convinced that the 3D printing technique is a game changer in the eyewear business and, together with Materialise, intends to promote the technique among other market players.