by Smithsonian Institution National Museum of Natural History, Department of Anthropology in collaboration with Materialise 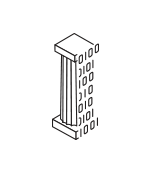 In 2002, archaeologists discovered the grave of Bartholomew Gosnold, the founder of the first permanent English settlement in the New World. 3D printing was used to make a life-size reconstruction based on a CT scan of his remains.

This reproduction of the actual skeleton was prepared for the National Museum of Natural History (NMNH) exhibition entitled Written in Bone: Forensic Files of the 17th-Century Chesapeake. This exhibition was an outgrowth of our research on 17th-century burials from the Chesapeake region, of which Jamestown was an important component. The exhibit was originally planned for two years, but was extended to a total of five years. It became the longest running temporary exhibit of the NMNH because of public interest. During the final year, we replaced the actual Gosnold skeleton with the replica produced by Materialise because the actual bones were promised for another exhibit. (We did not think WIB would be up for five years.) The replica was painted to look like the actual bone and, on display, only an expert would be able to tell the difference.